The high public trust in the medical profession carries risks

Being too trusting can result in important issues not being noticed or addressed.

Here is just one of hundreds of examples I have encountered where a more critical approach might have painted a more comprehensive picture.

A Guardian article from July 2019

On 12th July 2019, the UK Guardian newspaper published an article entitled ‘Ketamine-like drug for depression could get UK licence within the year’.

While the author of this Guardian article did attempt to include some balance in this article – including a comment from a Harvard psychiatry professor that ‘the upshot is that the drug is an over-hyped ripoff’, no references were made to a factor that should always be taken into account – potential conflicts of interest.

The several million daily readers of the Guardian might have been in a better position to come to an informed conclusion about this article if the author had included the fact that one of the interviewed psychiatrists who enthused about this substance receives consultancy fees from Janssen, the manufacturer of this substance, and received funding worth £163,635.00 from Janssen in 2016: 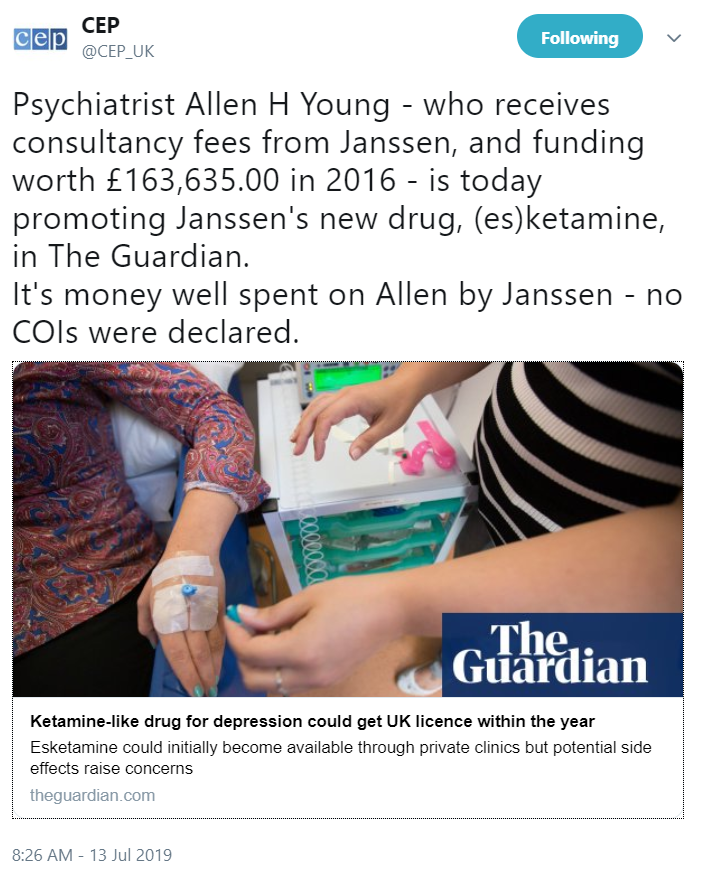 The Council for Evidence-based Psychiatry  – CEP, who issued the above tweet – did some further investigative work, and found that a second psychiatrist who was enthusiastic about this substance in the article was a listed co-inventor on a patent application for the use of ketamine in depression, thereby having a serious vested interest in relation to potential mega-royalties: 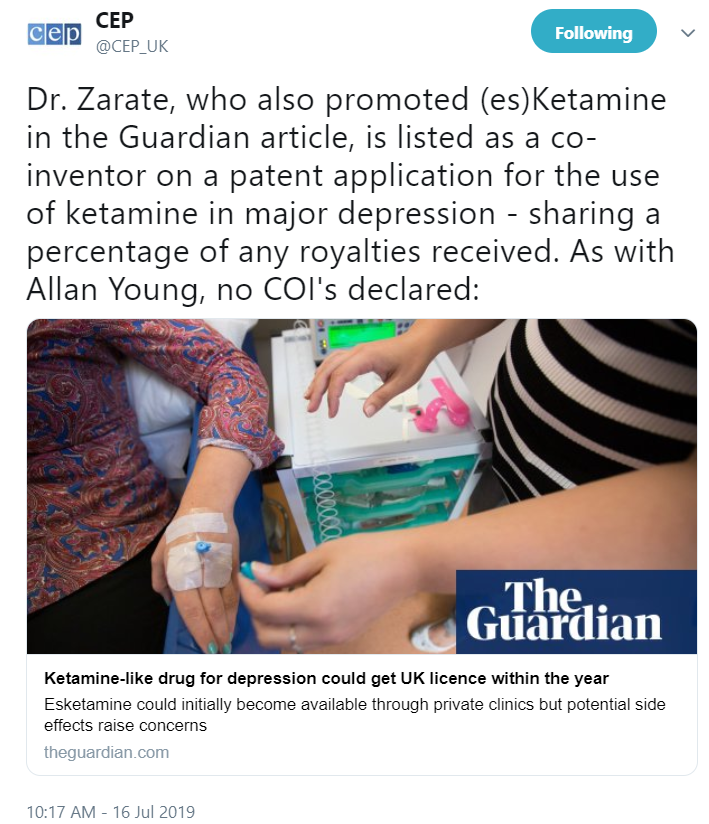 The media have a responsibility to provide the public with the information necessary to make an informed opinion/conclusion. Failing to include potential conflicts of interests – as this Guardian article was guilty of – means that the public are deprived of potentially highly relevant information.

During my 35 years a medical doctor with a special interest in emotional and mental health, it has become clear to me that the medical approach to mental health is seriously biased and off track, realities that I discuss in detail within my ‘Depression: Its True Nature online courses.

The medical approach to mental health is fundamentally biased, because it consistently favours a biological approach and understanding –  regardless of the fact that there is very little evidence to support such a stance.

The medical approach is seriously off track, because it systematically fails to appreciate the place of emotionality, psychology, trauma and its consequences within the experiences and behaviours that become categorised as various ‘mental illnesses’.

Psychiatric enthusiasm in relation to ketamine is based far more upon the fact that this fits within its ideological preferences, than on an objective commitment to the public interest.

Over the years, I have encountered hundreds – possibly thousands – of psychiatrists. There have been few psychiatrists that I can say I truly respect. American psychiatrist Paul Minot MD is an exception to this. In a Twitter thread following the publication of this article, Paul Minot wrote in concerned tongue-in-cheek fashion; 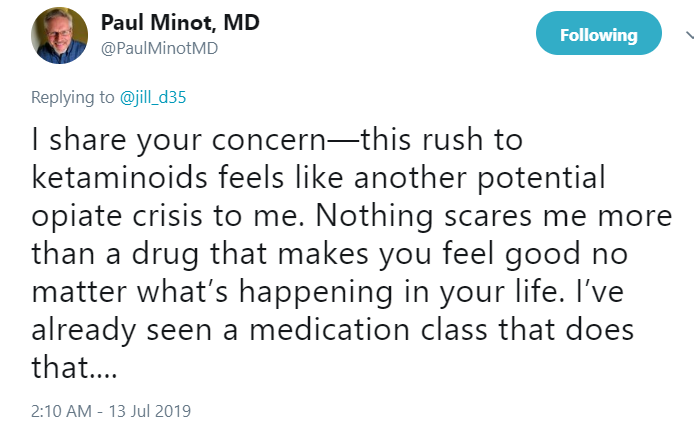 At both the individual and collective level, mental health is far too important to allow vested interests to influence the direction of mental health globally.

One might reasonably have expected the two psychiatrists – referred to within the tweets included here – to have volunteered any potential conflict of interest to the Guardian journalist, in the public interest.

Failing that, it is regrettable that the Guardian author of this article or the Guardian editors overlooked the issue of potential conflicts of interests.

Working Therapeutically With Clients With A Psychiatric Diagnosis.

For the general public: