Home My Books Beyond Prozac 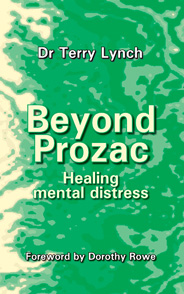 The book is also available through bookshops worldwide. Any bookshop that does not have the book in stock can order it for you. If you would like to order a copy directly from Terry, or if you would like copy signed by Terry, please email him at info@doctorterrylynch.com.

As a practising GP, Dr Terry Lynch was plagued by increasing doubts about his effectiveness in dealing with patients experiencing emotional distress. He no longer trusted the drugs handed out as routine treatment for so-called mental illnesses. Changes in his working practice and a training in psychotherapy culminated in the writing of his controversial and deeply felt book. Every year one million people take their own lives worldwide, and thirty million attempt suicide. Terry Lynch believes that suicide is a final act of avoidance, which in the context of the person’s life always makes sense. Drawing on his wide experience as a GP and counsellor and using real case histories, the book demonstrates the common sense, but sadly controversial, idea that personal contact is a better healer than drugs.

Dr.William Glasser made the following references to Terry Lynch and his book Beyond Prozac in his 2003 book Warning: Psychiatry can be Hazardous to your Mental Health (I wrote this book’s foreword):

Dedication: “To Brian Lennon, my esteemed colleague from Ireland. Since we met years ago, I have felt that your mind was a mirror of mine. When you sent me Terry Lynch’s book, Beyond Prozac, I was on my way.”
p. xxii: “. . . to save time, read Beyond Prozac,  the seminal work on the hazards of biological psychiatry by Terry Lynch, a man you’ve already met in the Foreword to this book.”
p. 23: “Acquaint yourself with a few of the books in the Appendix so you can see for yourself that there is support for what I suggest. As I said in the Preface, if you have time for only one, I strongly recommend Beyond Prozacby Terry Lynch M.D. I just loved that book. If I every get seriously unhappy, I’m going to camp on Terry’s doorstep.”
p. 233: “Beyond Prozac . . . ,  the seminal work on the hazards of biological psychiatry by Terry Lynch, This is the book that gave me the impetus to write the book. I cannot speak of it too highly. If ever a man puts a human face on mental suffering and offers an optimistic message, Dr. Lynch is that man. I’ve read it twice and would not be surprised if I opened it again. I am so pleased he agreed to write the Foreword that began this book.”

In her classic book, Depression: The Way Out of your Prison, third edition (2003):
Preface to the third edition (p. xi): “Often grassroots ideas inspire people, who would otherwise have lived quietly, to do great things. One such person is Terry Pynch, an Irish GP. As a GP he could have enjoyed a hard-working but quiet life, tending to the physically ill and sending those with troubled minds to the psychiatrists, but he found that what the psychiatrists did did not accord with his experience. So he encouraged his troubled patients to talk to him, and out of these talks he wrote Beyond Prozac, a book which he knew would not please his psychiatric colleagues. In this he said,
‘I now believe that depression is not a ‘psychiatric illness’. Depression is a coping mechanism, a withdrawal within oneself when reaching out to others has become too painful, too risky. Depression is an unhappy place to be, but for the person who suffers with it, depression is the lesser of two evils . . . Doctors believe that depression serves no purpose. We have had ‘Fight Depression’ and ‘Defeat Depression’ campaigns, as if depression were an enemy to be exterminated. These campaigns have received great publicity. But they have made little impression, either on depression or on the suicide rate. I believe that even the most severe depressions make sense, and are understandable in the context of the life that person has lived and experienced’.”
p. 260, on clinical tests for depression: “The GP Terry Lynch wrote (in Beyond Prozac):‘In twenty years of working as a doctor, I have never heard of any person having a diagnosis of depression, schizophrenia, manic depression or any other psychiatric condition confirmed by a blood test or any other test. Dosages of psychiatric drugs are not adjusted according to blood-test results, as happens with all biochemically based illnesses. When doctors decide to stop treatment in cases of ‘mental illness’, no blood test is done to confirm that the supposed biochemical abnormality has been eradicated. Why no tests? Because no such tests exist—because no biochemical abnormality has been demonstrated in any psychiatric illness. Manic depression is the only psychiatric condition where regular blood tests are carried out. These tests are not done to check the level of any body chemical. Rather, they are done to check the blood levels of the treatment drug lithium, a drug with highly toxic side effects’”.
(Since I wrote Beyond Prozac, blood tests have become used to measure levels of other drugs, such as Epilim in bipolar and clozapine in schizophrenia. As with lithium, these blood tests are done not to identify underlying biochemical abnormalities—there are none—but to check drug levels in the bloodstream).

“The single most important contribution to our understanding of suicide in the past ten years, a vital articulation of the unsayable” (Irish Times 2 July 2001).

“A group of Japanese scientists…hypothesise that ‘very low but sustained lithium intake can prevent suicide in the general population’…here is medical science as an institution of social control, with the physicians as ‘biocrats’ subverting democracy by the sheer force of their ‘professionalism’. Has medicine become too professional, with ‘cases’ to be ‘fixed’ rather than help patients to be listened to and helped? Yesterday’s physician used to diagnose the sick; today’s biocrat decrees who should be treated, and mass treatment, such as dumping…stuff in the water, saves time.
In the 2004 edition of Beyond Prozac: Healing Mental Distress by Dr. Terry Lynch, he quotes Aldous Huxley, author of Brave New World (1931), writing in 1959 that ‘…there will be within the next generation or so a pharmacological method of making people love their servitude, and producing a kind of painless concentration camp for entire societies…’. I guess that Dr. Lynch cited this because of his concern over psychiatry’s excessive reliance on medication to treat mental health problems. However, the Japanese lithium dumpers – as well as psychiatrists and patients could usefully profit from reading this book. In it, they will discover – re-discover – the art of helping people who find life too difficult to cope with. It involves “care”, not adding chemicals to water…To my mind, Dr, Lynch…talks a great deal of common sense…if you could only put it in the water”
(George Winter, “The truth is hard to swallow”, Irish Medical News, 13th July, 2009).